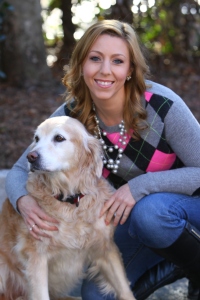 Actress-turned-producer-director Sarah Spicer is LOVING being a part of Team Vitus and working with the Harris family!

Growing up with a doctor father and nurse mother, Sarah has a passion for medically centered stories. After graduating with a BA in French from Florida State University, she started her career in medical device sales, helping patients heal fractures and spine fusions, and observing some pretty awesome surgeries, such as a brain tumor extraction from the frontal lobe. (That was awesome!)

After four years in the “corporate grind”, she quit her job and enrolled in film school to pursue her dreams of acting, writing and filmmaking. She moved back to her hometown of Atlanta in 2012 and started her production company, Spicer Productions. Sarah has worked on and acted in national commercials, studio films and international and national feature films. She made her directing debut with a documentary called Hope for Steve, which she produced and co-directed with friend Matthew Moore. The film chronicles an Atlanta newlywed couple who are battling ALS, and was released on Amazon, iTunes and Barnes and Noble in May of 2016.